Thinking Green, Iron Fish Distillery in Thompsonville (southwest of Traverse City) has created a “Sustainability Pledge” to their customers, partners, and community members. Pledging to stay sustainable has helped guide this business in their day to day decisions when managing their 120 acre farm and distillery! Iron Fish Distillery has been working to reduce the use of fossil fuels through the use of solar energy. This reduces waste produced from production. While operating, this distillery focuses on compostable supplies that helps serve their customers in their cocktail bar. In general, producing spirits is a very carbon intensive practice. Since Iron Fish Distillery produces their spirits on 120 acres of working farm and forest land, the distillery is able to produce these spirits in a carbon neutral way and is helping to minimize our carbon footprint.

Distilled from local winter wheat, Iron Fish Distillery is most proud to produce and sell their Michigan Woodland Gin. This gin features twenty botanicals, some of which come from the Michigan woodlands. One of them is Concolor Fir, which gives the gin a beautiful citrus flavor and leads to a fennel and spicy finish. Their Michigan Woodland Gin has earned numerous international awards and has grown immensely into the hearts of spirit drinkers. On the other hand, Iron Fish Distillery has created “Four Cask” which is made up of a four barrel blend of bourbon; Maple Syrup, Caribbean Rum, Cognac and Sherry. This spirit features a sourced whiskey that is finished at the farm in barrels from all around the world. Although it is not produced by Iron Fish Distillery, the team works to change up the character to make it their own.

Recently, Iron Fish Distillery has launched several new spirits. The Arctic Grayling Fish is the distillery’s first fully distilled and aged whiskies, created in honor of the Arctic Grayling fish which was prolific in Michigan rivers in the 1800’s. The Rye Whiskey is 100% rye grown in Free Soil, Manistee County, and is available in-store and statewide. On the other hand, the Barrel Strength, Straight Bourbon is a blend of locally grown corn and wheat. In addition to producing these two products, Iron Fish Distillery donates to the Iron Fish Arctic Grayling Research Fund which helps support research conducted at Michigan State University, which aims to return the grayling fish into Michigan rivers. 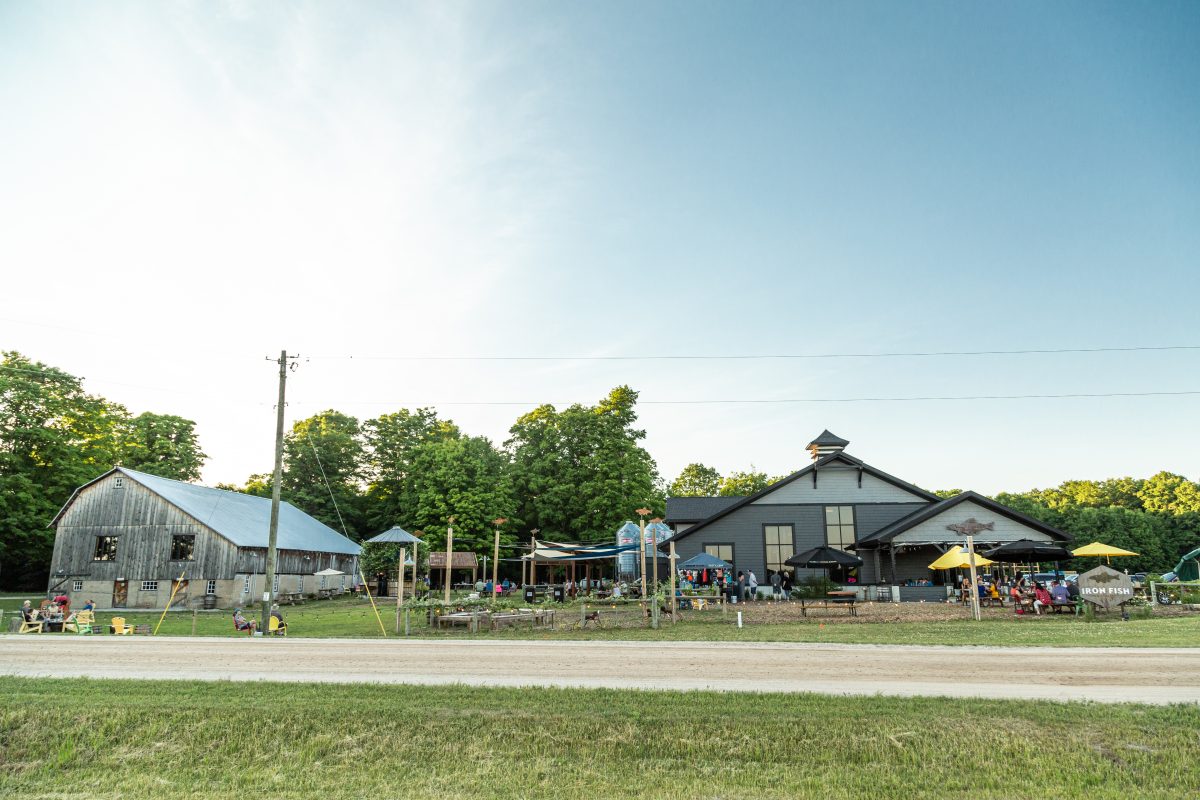 As COVID-19 became a new reality, the team decided to create hand sanitizer for the front line health care workers in the surrounding communities. This included Munson Healthcare and Points North. In addition, Iron Fish Distillery distributed hand sanitizer to areas including the Upper Peninsula and Mackinac Island. Total, the distillery donated over 200 gallons of hand sanitizer to nonprofits! On top of that, Iron Fish Distillery contributed to the Michigan Hospitality Industry Employee Relief Fund with the revenue obtained from the sale of Iron Fish Four Cask Whiskey and their Arctic Grayling Rye Whiskey. These donations helped wait staff and bartenders across Michigan.

Iron Fish Distillery has mastered being environmentally conscious while crafting Michigan-made spirits, proving that life can be just as enjoyable with a sustainable approach.